The Babylonian Captivity of the Church

Church Membership continues to inflict a horrific cost on the Christian faith. What’s the use?

Like the Jews hauled into captivity, Christians were held in captivity in the Dark Ages.

Martin Luther first penned the words, “Babylonian Captivity of the Church” almost 500 years ago in reference to the highly systematized, sterilized church of his day which was engaged in lavish building projects and bloody, protracted Crusades in the Mideast. He launched the Protestant Reformation against the ugly institution responsible for torture, Jewish genocide, and the Great Inquisition. He identified the institution claiming to represent Jesus Christ on earth as the Tower of Babel revived—the epitome of the World System in all its glory. Something went terribly wrong in church history, according to Luther, which he called the Babylonian Captivity of the Church. Much like the Babylonian conquest of Israel in the time of Daniel, the people of God were held captive by a manmade kingdom.

Much abuse of power enjoyed by the Medieval Church was routed out by the Reformation, but there remains vestiges of chains still hampering Christian freedom. Perhaps the most insidious and lingering chain is revealed by the Parables of the Kingdom, given by Jesus to warn us against the false “church” that would arise in His name. These parables were widely disregarded by church leaders in the 4th C, triggering the tragedy of the Babylonian Captivity. Unfortunately, the Kingdom Parables are still widely misunderstood and overlooked, prolonging the misery of God’s people held in Babylonian Captivity. For good reason, the mass population exiting the church today are simply escaping their captors.

The core problem lies with the central parable in the series He told in Matthew 13, known as “The Wheat and Tares”. It is such a simple parable, and Jesus even interprets it for us, so it’s a marvel of history how universally-ignored it was. It goes like this:

Jesus presented another parable to them, saying, “The kingdom of heaven may be compared to a man who sowed good seed in his field. “But while his men were sleeping, his enemy came and sowed tares among the wheat, and went away. “But when the wheat sprouted and bore grain, then the tares became evident also. “The slaves of the landowner came and said to him, ‘Sir, did you not sow good seed in your field? How then does it have tares?’ “And he said to them, ‘An enemy has done this!’ The slaves *said to him, ‘Do you want us, then, to go and gather them up?’ “But he *said, ‘No; for while you are gathering up the tares, you may uproot the wheat with them. ~’Allow both to grow together until the harvest; and in the time of the harvest I will say to the reapers, “First gather up the tares and bind them in bundles to burn them up; but gather the wheat into my barn.”‘” Matthew 13:24-30

Then Jesus interprets it:

Then … His disciples came to Him and said, “Explain to us the parable of the tares of the field.” And He said, “The one who sows the good seed is the Son of Man, and the field is the world; and as for the good seed, these are the sons of the kingdom; and the tares are the sons of the evil one; and the enemy who sowed them is the devil, and the harvest is the end of the age; and the reapers are angels. So just as the tares are gathered up and burned with fire, so shall it be at the end of the age. The Son of Man will send forth His angels, and they will gather out of His kingdom all stumbling blocks, and those who commit lawlessness, and will throw them into the furnace of fire; in that place there will be weeping and gnashing of teeth. Then the righteous will shine forth as the sun in the kingdom of their Father. He who has ears, let him hear. Matthew 13:34-43

The point is made so simply, it’s mind-numbing—along with good, fruit-bearing plants (the “wheat”), the enemy will plant weeds bearing no fruit (the “tares”). His point is to allow both false and true Believers to co-exist within the Church, and trust God to sort out the difference in the end. To emphasize it further, He says great harm will be inflicted on the wheat by attempting to separate the two.

Astonishingly, Christians almost immediately began to codify and enforce criteria that would separate “true” and “false” Believers. Today we know it as “Church Membership”, a practice simply not taught or known to the New Testament. Church Membership is the bane of Christianity, triggering the horrors of church history like burning “heretics” at the stake and plucking out eyes and tongues to force heretics to recant and recite “orthodox” creeds. So many horrors stem from the mistaken effort to “cleanse” the church of its “heretics”, and often the “heretics” were true Believers, like John Huss, Tyndale, and thousands of martyrs who stood against the Babylonian Captivity. Just as Jesus warned, the wheat itself would be harmed by human efforts to “purify” the church.

Jesus does a strange thing after the Wheat & Tares Parable—He gives several more parables about “The Kingdom”, but gives no interpretation. The change is remarkable, since He fully interpreted the first two parables. Even more troublesome, He tells the disciples that He talks with parables deliberately to hide their meaning from people with hard hearts, so that, “while seeing they do not see, and while hearing they do not hear, nor do they understand.” (Matthew 13:13) The implication is clear—He stopped interpreting His parables at the point where people would stop listening. He knew church history would stop listening at the parable of Wheat and Tares. It was useless to continue interpreting parables to an audience ignoring His clear teachings, which ended up as the audience dominating church history.

Any human effort to separate “insiders” from “outsiders” is doomed to failure, according to Jesus, and the reason is simple—membership in the Body of Christ is determined by the Holy Spirit, not by reciting a creed invented by some church council:

For by one Spirit we were all baptized into one body, whether Jews or Greeks, whether slaves or free, and we were all made to drink of one Spirit. 1 Corinthians 12:13

Church Membership is an invisible quality, truly known only to the Holy Spirit and the individual Christian who made the choice to invite Jesus inside. People may say they believe, but how can anyone know for sure? “Nobody can say ‘Jesus is Lord’ except by the Holy Spirit,” says God’s Word, and that simple statement is more precise than any of the complex creeds invented in church history to identify “true believers”.

Pushing for a “Membership Drive” is the wrong direction and wrong message. Polls say that people everywhere are disgusted with church institutions and the red-tape of Church Membership, but people are not disgusted with Jesus Christ. Unfortunately, Church Membership often is at the forefront of the Christian message, so people are leery of getting “hooked” into “joining” some church institution, pollsters tell us.

Church Membership is a powerful tool in the hands of canny hypocrites. The greatest scars on the face of Christianity are inflicted by “upstanding members of the church” who qualify for membership, but lack spiritual fruit. Jesus said the difference between wheat and tares is largely evident in the fruit, but fruitfulness is never considered by membership criteria. Instead, hypocrites qualify as “upstanding church members” by reciting a few words (and pledging a few dollars).

How much bloodshed has been perpetrated by Church Membership, even in our own day? British Protestant versus Irish Catholic in Northern Ireland, Orthodox versus Catholic, and the list is an endless chamber of horrors. Religious organizations have names, which is not the problem; membership cements the relationship between people and religious institutions, like chains. I can’t just attend a Catholic church, I must also be a confirmed member, which forever changes my standing before God and other people, supposedly—but what a false identity it is! Simply because I recited a few words at my confirmation really means nothing…it’s all hot air. I don’t even have to believe the ritualized words, as Michael Corleone graphically demonstrated in the Godfather. 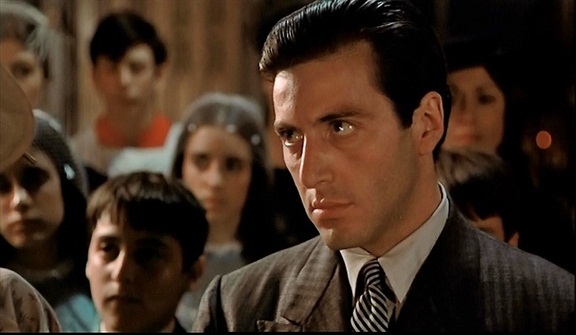 Church Membership is not going away any time soon, I fear. I asked one prominent church leader if he might consider dropping the Membership Drive he was pushing, and he blew up at me!

“How dare you try to instruct me on how to grow my church!” he bellowed in a room full of stunned faces. “Have you ever grown a church as big as mine?” I kid you not. How to answer such a question? “Yes sir, yours is bigger than mine…”

There must be something immensely gratifying about counting Church Members. Perhaps soliciting financial commitment is the driving need. How else to explain its stubborn persistence, despite its many evils? How else to explain the way people can read the plain meaning of the Wheat and Tares so that, “while seeing, they cannot see”?

This entry was posted in church history, Studies. Bookmark the permalink.